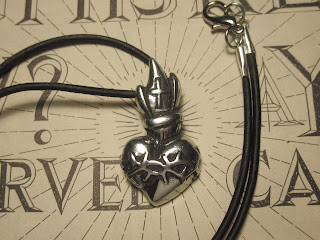 The Sacred Heart is one of the most famous religious devotions to Jesus' physical heart as the representation of His divine love for Humanity.
This hand carved charm measures 1.5". It is cast in 100% lead free pewter and hangs on a leather cord with lobster clasp.
$24.99 plus S/H 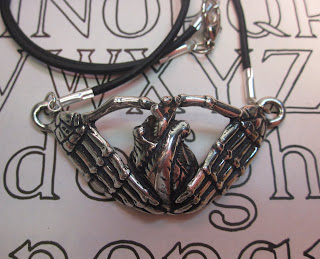 "The Claddagh ring is a traditional Irish ring given as a token of love or worn as a wedding ring. The design and customs associated with it originated in the Irish fishing village of Claddagh, located 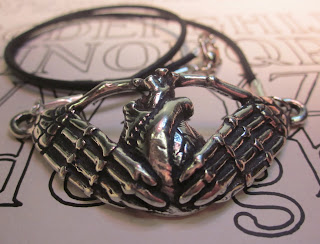 just outside the city of Galaway. The ring was first produced in the 17th century during the reign of Queen Mary II, though elements of the design date to the late Roman period.

The Claddagh's distinctive design features two hands clasping a heart, and usually surmounted by a crown. The elements of this symbol are often said to correspond to the qualities of love (the heart), friendship (the hands), and loyalty (the crown).Claddagh rings may be used as friendship, relationship, eternity, engagement, or wedding rings depending on the intention of wearer and, in the case of a gift, of the giver. There are three traditionally accepted ways of wearing the ring which may signal someone's relationship status"

This is a twist on the traditional Irish ring by Lunar Opus worn as a necklace. The skeleton hands hold the anatomical heart and each carpal attach to findings with leather cord. The piece is joined with a lobster clasp.
The skeleton hands also form a heart shape with the joining of the thumbs on the top of the heart.
$49.99 plus S/H 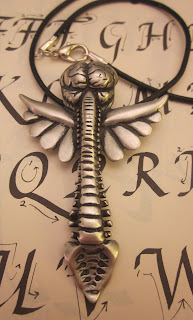 This piece is a short story about meditation.  The brain and spine are symbolic of mind and body.  The wings represent the freedom of thought and weightlessness of conscious brought on through meditation.  This is a very eye catching design and it fits beautifully on the chest of a woman.
The 100% lead free pewter casting comes with an antique brushed finish.  It hangs on a 2mm leather cord, and closes with a lobster clasp.
$49.99 plus S/H. 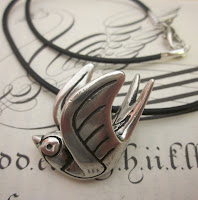 Freedom, loyalty, good luck, finding your true love, traveling far and always coming home.  These are a few symbolic traits of the sparrow.  When I asked my wife Stefanie what she would like to have made for her, she requested the sparrow.  I thought it would be great to add dimension to the bird making it stand out from the body, and many other sparrow necklaces that we have seen.  This was hand carved in wax and cast in 100% lead free pewter.  The sparrow measures 1.25" wide and 1" tall.  It hangs from a 2mm leather cord with a lobster claps. 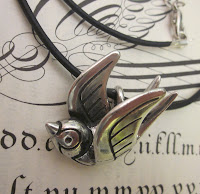 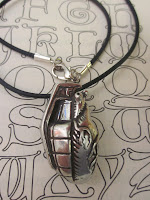 The Anatomical Heart Grenade by Lunar Opus is a conversation starter for sure.When I sculpted this piece I was thinking of love and heart break.  The possibility of an explosion is always present in a relationship and it is matter of who pulls the pin.  After seeing the finished wax carving, a number of meanings started to come to mind like love/war, heart attack, and the classic Ted Nugent "Love Grenade".  Although, "Stranglehold" has to be my all time favorite.  The casting measures 1.5" tall, made from 100% lead free pewter and comes on a 2mm leather cord or 1.25" steel key ring. 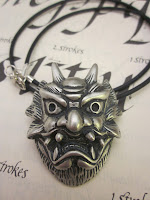 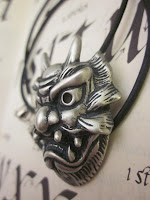 We are excited to introduce our Japanese Demon Oni Mask pendant.
This piece, as all of Lunar Opus' pieces, was hand carved in wax.  The casting is 100% lead free pewter and comes with an antique brushed finish.

A brief description from Wikipedia explains the symbolism behind this 'chunky' and well crafted piece of jewelry.
"In more recent times, oni have lost some of their original wickedness and sometimes take on a more protective function. Men in oni costumes often lead Japanese parades to ward off any bad luck, for example. Japanese buildings sometimes include oni-faced roof tiles called onigawara (鬼瓦?), which are thought to ward away bad luck, much as gargoyles in Western tradition.[13]"

To purchase this piece and others, please visit our Big Cartel and Etsy shops.
Posted by Clinton No comments: